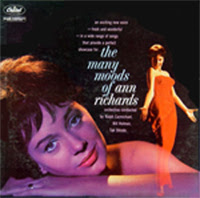 Here is a song by the great yet underrated jazz singer Ann Richards.
Born Margaret Ann Borden in San Diego in 1935, Ann Richards burst onto the West Coast music scene in 1954. That year, she was brought to the attention of bandleader Stan Kenton. Kenton was impressed, and consequently Richards signed with Capitol Records. For her debut album, "I'm Shooting High" (1958), Richards recorded a great selection of lushly arranged standards. Richards' next Capitol album, "The Many Moods of Ann Richards" (1959), intentionally put the singer through stylistic paces ranging from cool jazz to the East Asian exotica of Tak Shindo. She and Kenton went on to make a number of good recordings including the sizzling Capitol album, "Two Much!" (1960). What's more, the busty, brunette singer became something of a jazz pinup - or, as jazz critic Leonard Feather called her, the "Elizabeth Taylor of the hip set". But she left Capitol and later signed a contract with the Atco label and embarked on a new album - "Ann, Man!". Taken as a whole, this is by far Ann Richards' most consistent solo album. The record comprises a mixture of swinging, bluesy numbers and slow, intimate ballads. Richards also enrapts the listener by drawing out her vibrato. To heighten the effect, Richards often ends a phrase with a quick-vibratoed, Marilyn Monroe-like trill, as if to make the listener even more "hot and bothered". Richards is a strong singer with a great vocal ability - clearly influenced by June Christy. Sometimes Richards seems to duplicate Ann-Margret's "tigress" singing style and choice of material, so enormously popular at the time. But Richards' career was not what it should have been and she was confined to jazz clubs on Sunset Strip, where she developed a small but loyal following and gradually earned respect for her ability to scat. But Richards' dreams of big-label stardom and success were gone and the prospect of failure, along with the specter of her divorce from Kenton, devastated the singer. Finally, on April 2, 1982 Ann Richards was found dead in her Hollywood apartment. She had taken her own life.
It's time to rediscover Ann Richards' great voice and style!

The masquerade is over