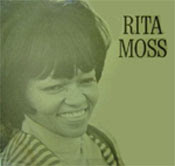 Here is a great song by a little known today but very refined singer and pianist of the sixties, Rita Moss (1918-2015), aka "Queen Moss" (because her fans had a cult for her)! Discover and enjoy!


A little biography (from the net):
Rita Moss is a jazz and ballad singer born in Akron, Ohio, notable for her 4-octave vocal range. Although she took piano lessons as a child, she is a mostly self-taught multi-instrumentalist who can play piano, organ and drums.
She first came to attention following a debut at New York's Park Avenue Restaurant, where public reception led to a stay of over 7 months. Appearances in London, Ontario and Cleveland, Ohio followed, including performances at jazz DJ and impresario Leonard Feather's concerts. Initially billed as "Reta" Moss, her first single was released in January 1950 on Futurama Records, a local label run by Main Stem record store owner Arthur Bangel. Bangel formed Futurama to cut jazz, blues and rhythm, including artists involved in Feathers' contemporary bop concerts at Carnegie Hall.
In the early 50's Moss cut a few singles on Debonair, Decca and Mercury, including a 4 song EP on Clef (Verve) in 1952 with Chicago's George Williams Orchestra, although her first LP, Introducing Rita Moss, would be issued by Epic Records only in 1956. The selections were standards by the likes of Hart, Rodgers, Gershwin, Webster, Ellington; the release was notable in that one number was an original by Moss. A brief review in Billboard (31-03-1956) notes her "remarkable" vocal range and "breezy, whimsical style". 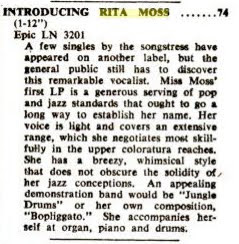 From 1957 to 1966 Moss appears to have focused on touring and night-club appearances. Sporadic singles cropped up on obscure labels and a 4 song EP appeared on Moss's private LA based label Rozell, including at least one self-penned song, Bobby's Blues, copyrighted under the name of Rita Roszelle. This period shows Moss honing exotica type vocal gymnastics in the vein of Yma Sumac. The Gothic single features an arranging credit to Jack Montrose, a key West Coast jazz figure. The turn of the 60's saw Moss playing LA area venues including Hollywood's Exotica Club and the Tahitian Village. In 1966 she turned up at a popular San Diego club where her 2nd LP, of live material, Rita Moss Reigns at Islandia, was issued on the Islandia's house label and generated considerable local acclaim for her vocal range, Sumac-esque stylizing and scat vocals. Airplay and coverage by radio and TV stations such as KOGO, KFMX and KFMB (then-home of Regis Philbin) attracted the attention of Dot Records who would go on to issue 3 LP's.
Talk to me tiger!, the first Dot LP, consisted of several familiar live club repertoire numbers from the Islandia LP, plus ballad material; the next LP, Superb, was arranged and conducted by Marty Paich. In 1968, the 3rd and last Dot LP produced a now obsure eponymous single that would become arguably Moss's most enduring song: Just a Dream Ago, although the LP also included a worthy cover of Sleep Safe and Warm, the theme from the film Rosemary's Baby.
A captivating night-club performer rather than a recording artist, "Queen Moss" to her performance fans, her impressive vocal talents and musical ambidexterity in a live setting failed to translate into record sales and broad appeal.
In the 1990's Moss recorded an LP of spiritual jazz issued on the private Retep label in San Diego. The compositions were mostly self-penned, with a lyrics co-credit to Dr. Russell Paul Schofield, founder-director of Actualism for Lightworkers, a spiritual training regime. Moss continued to perform live in San Diego and Los Angeles into the 2000's.


Listen to 3 other songs on the blog Around Yma Sumac and on the blog Great actresses: Mia Farrow.

Could someone tell me what happened with Rita Moss? Is she live yet? Where's Rita? She never recorded after the sisties. Why? Could someone say anything about?

I have for a long time seeked for info on Rita too. It seems Rita became the most kept top secret in the world. What happened to Rita ?
is she alive yet ? where is she currently ?
Why a so talented songstress vanished without a trace and has not recorded any other song ?
Ron Wolpa

I knew Rita not only in the 60s when she was at her apex but also for several years following her decision to quit singing. She didn't like the hype and the world of musical fame. She worked at many jobs but finally went back to school to become an attorney and married a police officer. We lost contact in the late 80s or early 90s, and I have often wished that I knew what happened to her after that time.

I know Lyle Ames who toured with Rita. Lyle, at age 86 took up the cello and I am his teacher. I just discovered his varied background as Rita's drummer, backup vocalist and flautist. He's now 88 and we've been working together for 2.5 years. Lyle is a treasure trove of information!

I'm the guy who composed, arranged, produced and directed the recording session for Inner Experience. It was recorded in San Diego at a well equipped private studio. Two outstanding players were Jim Plank on drums and Anthony Ortega and woodwinds. Rita wrote the melodies and had me compose that music around those melodies. She told me that most of the lyrics came from her pastor.
Her name was Loreta L.Waynesboro