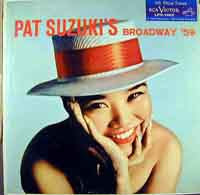 Here is a joyful song by the wonderful Pat Suzuki.
Pat Suzuki is a Japanese-American female singer most famous for her role and cast recording of the Broadway hit musical "Flower Drum Song", especially "I Enjoy Being a Girl". She was born Chiyoko Suzuki in Cressy, California, in the early 1930's. She sang at church on Sundays. In New York she received her first professional show-biz experience in a touring company of the Broadway play "Tea House of the August Moon". She got a permanent job in Seattle after the owner of a local club, called The Colony, was impressed. Bing Crosby happened to catch her act one summer night in 1957, and was so impressed by her powerhouse voice that he brought her to the attention of RCA Records, and she recorded a number of LPs for the label, albums featuring show tunes and popular standards. She appeared on the "The Frank Sinatra Show", which also led to a role in Rodgers & Hammerstein's Broadway production of "Flower Drum Song", as night-club singer Linda Low (the role would be played by Nancy Kwan in the 1961 film version). The Broadway soundtrack of "I Enjoy Being A Girl" has since been used in many movies and even viral videos up to the 21st century, though few are familiar that it was performed by an Asian-American. Throughout the 1970's, she continued to perform and record her music. She went on to appear in the original 1973 Off-Broadway production of Frank Chin's "Year of the Dragon" and the 1976 ABC sitcom "Mr. T and Tina", opposite Pat Morita, the first sitcom starring an Asian-American family. She has supported Asian-American rights, and continues to perform at forums such as Lincoln Center. In 1999 she released "The Very Best of Pat Suzuki".
Enjoy Pat Suzuki's vibrant voice!