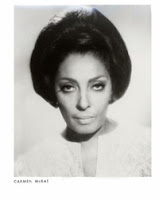 This beautiful song (music by Gilbert Bécaud and lyrics by Norman Gimbel) is performed here by one of the greatest ladies of jazz, Carmen McRae, who excelled as well in singing ballads, gifted as she was with much style and a very good voice, sometimes powerful.
Carmen Mercedes McRae (1920 – 1994) was an American jazz singer. Considered one of the most influential jazz vocalists of the 20th century, it was her behind-the-beat phrasing and her ironic interpretations of song lyrics, that made her memorable. McRae was born in Harlem, New York City, to West Indian parents. She began studying piano as a child. As a teenager she came to the attention of Teddy Wilson and his wife, the composer Irene Kitchings Wilson. Through their influence, one of McRae’s early songs, "Dream of Life", was recorded by Wilson’s longtime collaborator Billie Holiday. By the late 1940's she was well known among the modern jazz musicians who gathered at Minton's Playhouse, Harlem's most famous jazz club, where she was the intermission pianist. But it was while working in Brooklyn that she came to the attention of Decca’s Milt Gabler. Her five year association with Decca yielded 12 LPs. Her live 1987 duets with Betty Carter are highly regarded. The musicians she sang with include Benny Carter, Mercer Ellington, Count Basie, Sammy Davis Jr., Dave Brubeck, and Louis Armstrong. As a result of her early friendship with Billie Holiday, she never performed without singing at least one song associated with Lady Day.
Enjoy her cinematographic interpretation of this song!


Another performance by the great Carmen!
I'm glad there is you