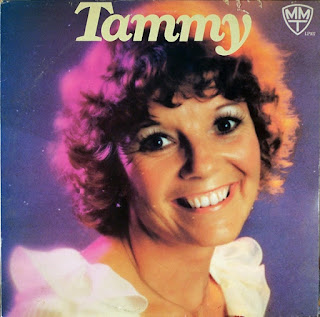 Here are 3 songs by the big-voiced singer Tammy Jones.
Tammy Jones (born Helen Wyn Jones, in 1944), is from Bangor, North Wales.
Jones began singing at an early age, winning many an Eistedfodd, and was soon established as a regular on both radio and television in her native Wales, singing in both English and Welsh.
Appearances on BBC Wales TV shows such as Hob Y Deri Dando Clywch,Clywch followed as well as having her own T.V. show simply called 'Tammy’.
Her first Welsh record was released in 1965 'Helen Wyn a Hebogiaid y Nos'. Then followed a duet record with Aled Hughes 'Caneuon Aled a Helen Wyn'. More records followed: 1966: 'Caneuon i'r Plant' (Songs for Children) as Helen Wyn, then 'Moliannwn/Scarlet Ribbons' as Tammy Jones, 1967: 'Edelweiss/All The Love In The World', and the LP 'The World of Tammy Jones’, 1968: 'Gwenno Penygelli/Twll Bach y Clo’.
In 1969 she released her first single record on CBS Records 'Lai Lai Lai/Pren Helyg' in Welsh and 'Lai Lai Lai/Willow Tree' in English.
Throughout the 1960s, Jones became a top rated cabaret artiste performing ballads such as "No Regrets", "My Way" and "The Day That the Rains Came Down". With a voice trained for opera at the Guildhall School of Music, London, this was her forte for many years.
Guest spots followed on English television with Benny Hill, Tom Jones, The Bachelors, Dick Emery and Morecambe and Wise, as well as appearances at the London Palladium and the Royal Variety Performance in front of HRH The Princess Anne. Cabaret appearances were both national and international, with visits to Poland, Israel, Zimbabwe, America, Canada, Africa, Europe, Australia, New Zealand and Argentina.
She was ‘discovered’ through the popular ITV talent show, Opportunity Knocks, which she won for six consecutive weeks in 1975. Her participation resulted in the most recorded votes ever on the show. This produced her biggest hit, "Let Me Try Again", which reached #5 in the UK Singles Chart. In 1975, Jones was the best selling UK female artist of the year based on her international record sales.
In 1976 Jones released a single entitled "Love's A Carousel", a song that she performed in BBC TV's A Song for Europe at the Royal Albert Hall, a competition to select the UK's representative for the Eurovision Song Contest. Competing against Frank Ifield and Tony Christie, Jones finished in sixth place out of the twelve contestants. Jones released an album of the same name soon after, but neither the single nor album made the UK charts.
This was followed up by Jones winning the first Opportunity Knocks satellite show via a TV link up with Australia. She had albums released in the UK with 30 piece orchestral backing and, in 1976, was voted the second best female vocalist in Britain.
Jones appeared in summer shows, and played lead roles in pantomimes, with many well known artists such as Les Dawson, Marti Caine, Jim Davidson, Hope and Keen, The Krankies, Craig Douglas and Charlie Drake.
After living in New Zealand for over ten years, Jones has now returned to live in Wales.
Enjoy Tammy Jones’ vibrant voice! 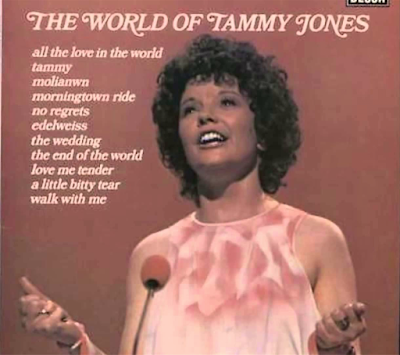 The day that the rains came down